Spycraft and Special Ops on the Frontlines of Afghanistan

and the Path to Victory

Operation Dark Heart is the now infamous spy memoir that was held up on the eve of its distribution to booksellers by the Department of Defense. The explanation for this halt was that the author, Lt. Col. Anthony Shaffer, was about to reveal important secrets about sources and methods of the organizations he was working for and with. The Pentagon bought the entire first printing and burned them

To get the book on the shelf, Lt. Col. Shaffer sat back down with his publisher and the government and re-edited the book. In what can only be a form of protest over the delay and expense not only was Operation Dark Heart re-edited, it was re-printed as if it had been attacked by a wide-tipped Sharpie marker.

In other words, many of the almost 300 pages went from this: 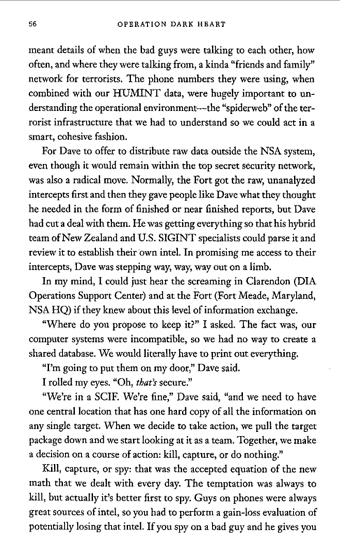 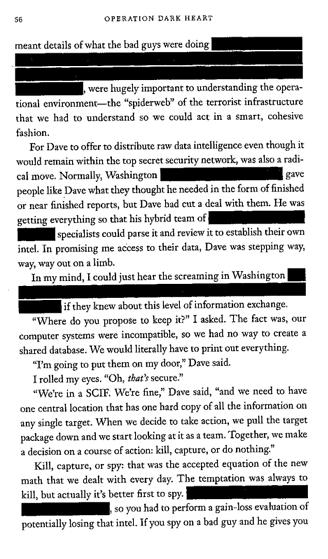 Aside from making it beastly hard to read , my ever imaginative brain kept trying to insert things into the black spaces. When it seemed Lt. Col. Shaffer was referencing a U.S. spy agency I apparently don’t have the clearance to know about, the NSA got inserted into the text. When taking about a nefarious Pakistani group that doesn’t have the U.S.’s best interests at heart, typically the ISI popped up in my mind. A method that had been blacked out was naturally imagined to be some sort of drone observation or signal intercept. Sadly, from the (un)redacted side-by-sides at the Propublica link above, it looks like my imagination might have been right more often than not in that regard.

Makes you wonder why they really bothered. Even if the gaps were fairly easy to fill back in, copies of the unredacted book were already circulating as advance reader copies (ARCs). Besides, in the digital age can you really suppress information? Heck, Wikileaks even says they have a copy.

Oh well, controversy aside here is my take on the book itself:

I really enjoyed Operation Dark Heart. Like many of the memoirs and dirt-level accounts of warfare in the mountains and valleys of Afghanistan (Horse Soldiers, War, The Wrong War to name a few) it is gritty and vivid with an interesting window on the clandestine segment of the war, a unique portrait of a modern American expeditionary warrior in a land that has been largely frozen in time for centuries. Operation Dark Heart is filled with unbelievable-if-it-wasn’t-true, stories of spies and special-ops. Some are humorous. Some are pretty depressing. All are interesting. You take away from this book, and from the others mentioned, that victory isn’t out of reach. We just have to get out of our own way to make it happen. Our people are talented. Our people know how to get a job done and a victory won when we let them do what it is that they do best, in the way that they do it best. It is only when we restrain or restrict, usually in the interest of political C.Y.A., risk-aversion, or failure of imagination and/or trust in our own force’s capabilities, that we lose the initiative and let progress slip from our grasp. Lt. Col. Shaffer’s prescription for fixing what we are doing wrong in Afghanistan even echoes the sage advice of Bing West in his latest publication The Wrong War (my review here).

Good reading… if you can get past the redactions.

This entry was posted on 04/21/2011 by Arherring. It was filed under Books and was tagged with Afghanistan, Anthony Shaffer, book review, Books, Military Non-Fiction.