On the Bookshelf: Invisible Streets by Toby Ball 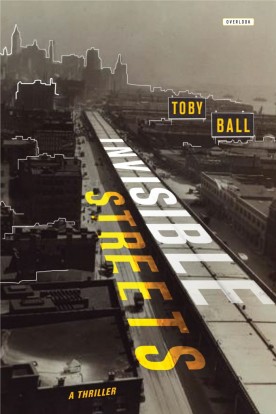 I have been a fan of Toby Ball’s City since I picked up the first novel The Vaults on a whim at the library just because I liked the look of the cover. I followed The City to the second novel Scorch City where again the cover served as the inspiration for the review. Now we have the third book of the trilogy, Invisible Streets, and it is easily my favorite of the three.

In the thirty years that have passed over the course of the trilogy The City, the real main character of the series, has gone through many changes. In this novel the changes are more visible than ever as The City is in the process of remaking itself. Whole neighborhoods, the patchwork of cultures and flavors that make the city such a compelling quilt of a landscape, are being literally plowed under to make room for expressways and the behemoth of a building they all will lead to, a monolith at the center of The City that is on one hand the keystone of Progress that The City has always embodied, and on the other hand the Tombstone for what in a way makes The City unique. But this is, of course, The City and in The City there is no getting away from the corruption, the dark undercurrents, the power plays, and the complicated, paranoid, devious, intelligent, and interesting characters that inhabit it. The plot of Invisible Streets is a slow, slow burn. It doesn’t hurry, nor does it lag, it smolders. Furthermore, even at that measured pace the reader doesn’t have the sense of being ahead of the characters even with the advantage of seeing the story unfolding from multiple viewpoints. The characters, still the noir archetypes of the reporter, the detective, the fixer, the politician, are vibrant and well written. The reader is made to feel their confusion, their resolve, and at times their desperation and hope. The story itself comes to a conclusion that in itself is satisfying and makes sense when looking back over the course of the novel, and yet it doesn’t really end because The City keeps on going, different but still The City.

Thank you for The City Mr. Ball.

On the Bookshelf: The Vaults by Toby Ball

I am well aware that if I let myself I’ll do nothing but keep going back to the books and the authors that I already know and love. I am lucky I have enough favorite authors, books, and topics that I would rarely, if ever, be bored in my familiar worlds. On the other hand, if I don’t switch things up and try something new, I’ll never discover the worlds and ideas that help me grow in knowledge and imagination.

The Vaults came to my bookshelf by having a really cool looking cover and an intriguing title. I randomly pulled it from the shelf at my local public library and decided to take it home without reading the synopsis. I had never heard of Toby Ball (which makes sense because this is his first novel) and I wanted to read the book with as few expectations as possible. I should do that much more often. I had a really good time doing it.

The Vaults is a noir-ish crime thriller that, while set in the 1930’s, has a timeless quality that comes from a well crafted setting and a story built with characters whose motives and actions weave together into a solid plot. The players are drawn from the best of noir tropes. In addition to a corrupt, former prize-fighting, mayor and the old-school gangsters, there is the newspaper reporter whose insights earn him accolades and enemies and who could be even better except for his drug habit. There is a private detective who makes his living mainly working for the poor and occasionally treading on the wrong side of the law to victimize the rich. My personal favorite character is the archivist at the eponymous Vaults. He is a man of singular intelligence and insight who would be a fearsome detective if not for his personal reticence. He is the overseer and guardian of the Vaults, the repository for all of the evidence and documents chronicling all of the crime collected in the history of the City. Oh yes, the most interesting character of all, the City. It is unnamed and unmapped and embodies the Gotham-like foggy, rainy, mystery of any good noir story. It has elements of New York and Chicago, with a strong immigrant heritage and neighborhood enclaves, but it seems grittier and more industrial, like a Pittsburgh or a Detroit The City is big enough to be a broad canvas, isolated into its own little world, but small enough that the personalities of its inhabitants can have big impacts on the events in and around it.

The Vaults was a good read and I really enjoyed it. Toby Ball, as an author, has great potential. My only complaint with The Vaults, and not even much of one as I will explain, is that some of the characters could have been combined, the reporter and the detective, the archivist and the retired transcriber, as well as the mayor’s two thugs. However, it appears that The Vaults will be the first book in a series, or at least the first book set in a world that will include other stories involving the City and its characters. If The Vaults had been a stand-alone novel it would have benefitted from the focus of a smaller cast of viewpoint characters, but as a series, the potential of more diverse viewpoints means the world can go in many more directions.

The next Novel of the City (I don’t know if anyone has created an official title for the series, but that one feels right to me. Feel free to put it on the cover!) by Toby Ball will be called Scorch City, and according to the author’s website will be available at the end of August. He also mentions a third book he has just started with the working title of Invisible Streets. I’m looking forward to both of them!